Seeing the railings in the back with fresh paint made me want to freshen up the other railings around the house. So, this weekend, my project was to finish painting the railings at our house. This time the focus was the front porch railings which weren’t quite as rusty as the back ones but still could use some fresh paint. 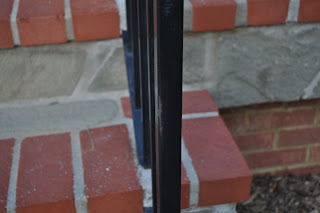 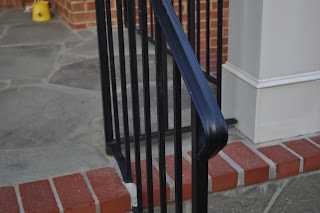 Unlike the backyard, it is pretty impossible to employ the spray paint method used here for the backyard painting project. So, I settled in with my paint brush and little can of rustoleum (gloss black) and got to painting each rail by hand. Thankfully, our front porch doesn’t get full sun until late afternoon so I was in the shade almost the entire morning. H rode her bike around the driveway while I worked and Hubby played with Baby E.
I finished one entire side before stopping for the day to go have some fun at

I picked up right where I left off when I woke up on Monday morning. On Monday, Mathlete Hubby was working on his own project so I had to work in between Baby E’s naps. I made pretty good progress prior to stopping to get ready for the cook-out we were headed to that evening. 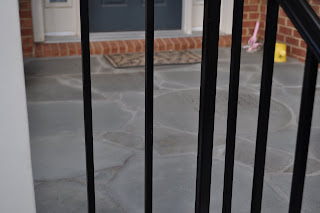 I would love to say that I was really diligent and came back to finish the final section after our barbecue but, then, I’d be lying. I got lazy and left it for this evening. We’ll pretend this is the final “after” picture though since I’ll be painting in the dark tomorrow night making pictures pretty difficult. 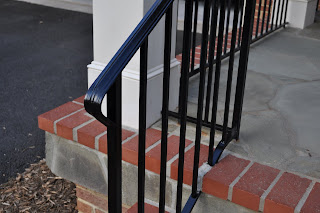 And because I am not convinced you can really tell a difference in pictures…a comparison shot: 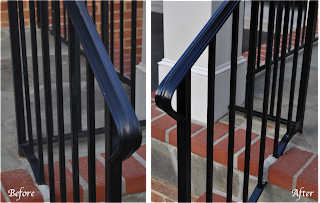 « The long and short of it
Don’t Stop Playing »