You are here: Home / Exterior changes / Don’t Stop Playing
5.31.11
While I was working on my own project, Mathlete hubby undertook the task of putting together the play set we purchased for the kids. The interweb is filled with accounts of how putting together one of these things can take 10-12 hours with two people working on it non-stop. I was pretty worried because I knew that we wouldn’t realistically have the time to undertake a project like that unless it spanned over several days. So worried that I almost purchased the play set from one of those places that charges a lot more but will deliver and assemble the play set for you. Mathlete hubby insisted though that he could a) do it mostly on his own and b) do it in less than 10 hours.
So, we purchased the play set and it sat in our basement from February until this weekend. To be fair, we were waiting on our HOA approval before beginning the task…not just being lazy or procrastinating.
Here is what we started with 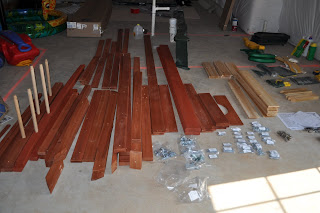 And here is daddy’s little helper (prior to daddy being rescued by our neighbors who invited H over for a play date…isn’t she charming?) 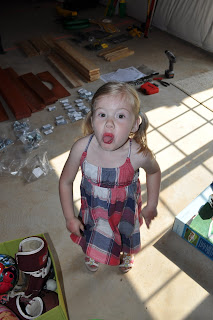 The backyard has full sun until mid-afternoon so Hubby suffered a lot more than I did for his project. By lunch time, he had made some pretty good progress. 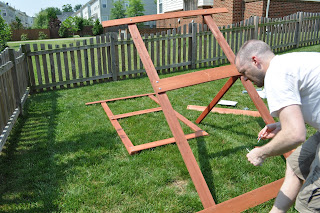 He kept working until it was time for the barbecue. At one point, he said he was going to skip the barbecue because he was determined to finish the play set in one day! We talked him down from the proverbial play set ledge though and he joined us for the cook-out. He quickly snuck off to work some more though after we ate.

He worked until 8pm or so on it and got to the point of attaching the swings. He stopped though because the whole thing needs to be staked down for security and he didn’t want to attach the swings prior to staking it down. Here is how it looked at the end of the night. 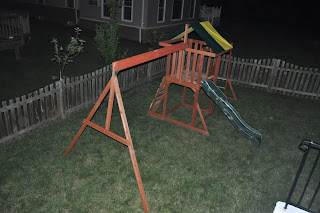 Fast forward to this evening when he spent another 30 minutes or so on it (staking and hanging swings) and you have: 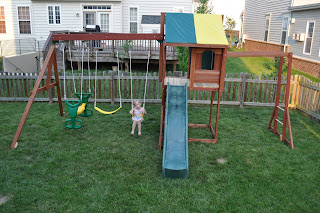 And this is where you could find H for the rest of the night. 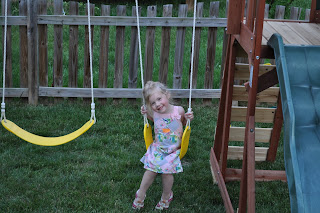 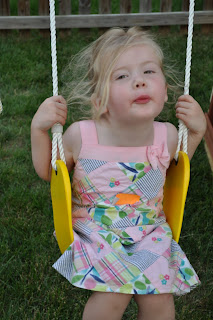