You are here: Home / Cooking / The long and short of it
This weekend was three day weekend for most people, including me! We spent so much of it doing stuff (albeit fun stuff) that it seemed like a shorter weekend than most though.
5.28.11
I’ve mentioned our impending beach vacation a few times before and most of Saturday was dedicated to preparing for it. Mathlete Hubby was in dire need of some new t-shirts, bathing suits and flip flops. The kids, while not lacking in the clothing department, needed haircuts.  So, we all hopped in the tank and headed to the mall.
This trip was for Baby E’s first haircut so there was a lot of picture taking and fawning. Here is a quick before shot. 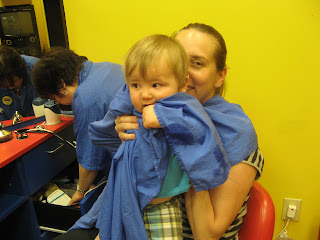 H was much older when we finally got her haircut so I wasn’t quite prepared for how wiggly Baby E would be. I think the lady did a great job considering how hard it is to cut the hair of a constantly moving 9 month old. 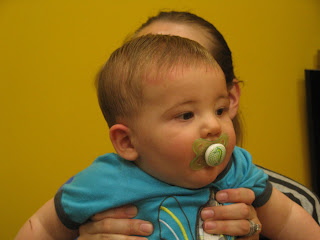 After haircuts, we shopped until everyone dropped. This included a quick trip to Gymboree to pick up a new outfit for Baby E. He was so excited about his diaper change in the mall that he peed all over his clothes! I’d love to blame the lack of an appropriate extra outfit on Hubby but, in reality, I am pretty sure I packed the diaper bag that day. So, instead, I’ll blame it on the sudden onset of desert like heat.
Sunday and Monday were combination project and fun days! I’ll recap the projects in a different post because they are much longer and have a lot more pictures.
5.29.11
Each year, a local town (where Mathlete Hubby grew up) has a street festival during Memorial Day weekend. This was our third year going and we dragged our good friends along with us. Despite the oppressive heat, we all had a good time riding rides (mostly the kids) and eating carnival food. 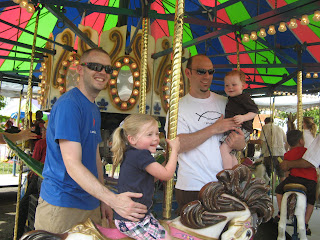 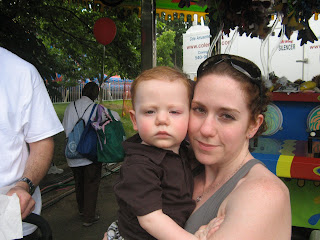 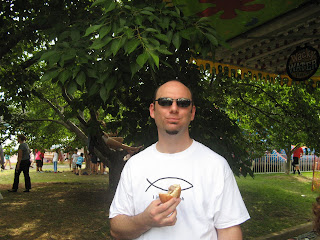 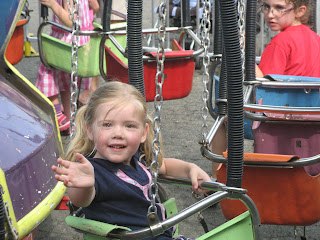 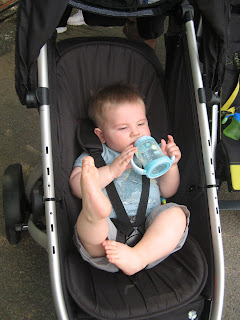 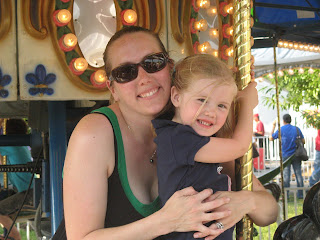 After the festival, we took a drive down memory lane to show H (and Baby E) where their daddy grew up. We even ran into some of his old neighbors out in their yard.
Oh, and I also saved a life a friend’s sanity on Sunday night with 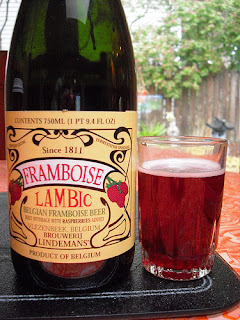 5.30.11
Our holiday weekend culminated in a cook-out with a lot of favorite people! Our neighbors hosted a cook-out for us (+2 kids), another set of neighbors (+2 kids), our good friends (+1 kid) and my mother-in-law who is still at our house saving our life helping with Baby E who hasn’t started daycare again yet. All together, it was 11 adults and 7kids for an awesome barbecue. It was pretty crazy though so I didn’t capture a single picture L Maybe a good description of the food will do? The yummy food included Bloody Mary Flank Steak, burgers, hot dogs, steamed shrimp, Greek salad, grilled veggies and rosemary/garlic potato wedges. 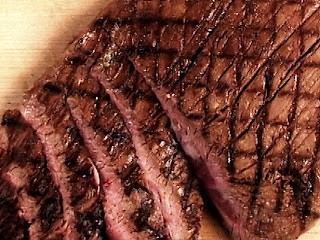 After dinner, the kids went outside to play in the sprinklers while the moms walked around the neighborhood with flyers for the upcoming block party. Hopefully, I’ll remember to get pictures when that comes around in June.
So, did you do anything fun this holiday weekend? Work on any projects? Soak up the air conditioning because it was too hot to move? Despite being exhausted after all of the activities, I think we accomplished a good balance of all three!