Awhile back, I was cruising the internet searching for recipes for my monthly meal swap.  I needed something fairly easy to multiply since I was making 5 batches but that was delicious too.  I picked a recipe from a very well known blog and bought all of the ingredients to make it.  Long story short…it was a flop.  There was absolutely no way the recipe would work as written and I spent over an hour trying to figure out  a way to make things work. That experience had me wondering if anyone had ever had those problems with one of my MY recipes and it turned out that I wasn’t along.  So, I reached out to a few other bloggers to create a fun new series called Shannah’s Test Kitchen.

This whole test kitchen thing definitely isn’t about me thinking I am the perfect recipe creator or cook. As bloggers, we create recipes and, when they go well, we share them with readers. A lot of times, readers have different experiences or decide to make changes to recipes to suit their taste/needs.  When I reached out to some blog friends, I was so excited that many of them wanted me to give their recipes a try and share what I loved, changed and/or maybe didn’t love.

How this whole things works:
1)  A blogger signs up to have their recipe included in the series.  I will not be doing recipes unless the blogger requests it by signing up or, if submitted by a reader, the blogger agrees to have the recipe included.  {Interested?  You can sign up here.}
2)  Each month, I will pick a recipe and make it exactly as it is written. Then, I will make it again with any changes I think would better suit my family, schedule and overall life.
3)  I will share a link to the recipe along with my thoughts here on the blog.  You won’t ever see the full recipe here but I will always provide a link.

Ready for the first one?  I am!  Today’s recipe is from the lovely Anyonita Nibbles who volunteered her Crockpot Beef Bourguignon.  I am a huge fan of this classic French dish so I was excited to try her version out…especially since it was crockpot friendly!  Using these ingredients {and more not pictured of course} 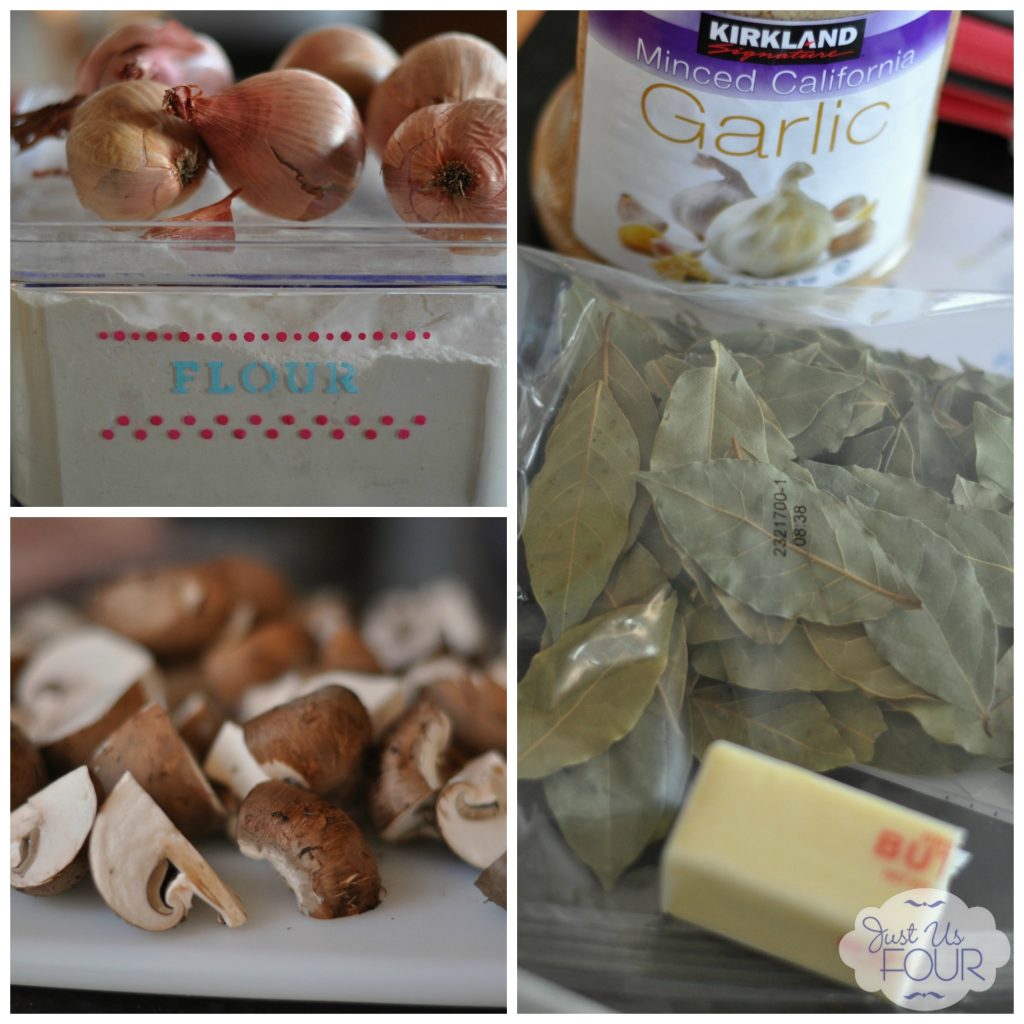 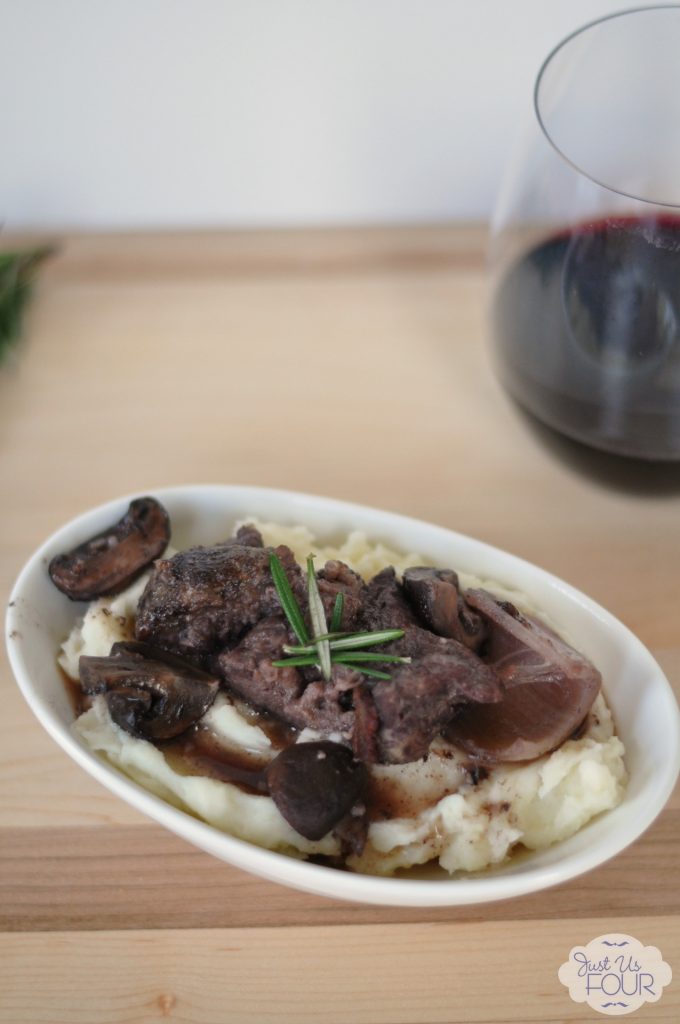 That looks so good right?!  It tasted absolutely fabulous.

As promised, I made it exactly to the recipe the first time.  The flavor was so good and it turned out fantastic.  But, it was prep heavy which I kind of shy away from when doing a crockpot meal.  Also, doing some of the exact conversions on the British measurements was tricky.  So, being the lazy crockpot cook I am, I made a few time savings changes to see if they would negatively impact the dish.

Here were the tweaks I made on my version {what you see pictured}
1) I only seared about half of my beef.  Basically, I seared what would fit in my pan and then put the rest in the crockpot floured but uncooked.
2) I did not cook the shallots.
3) I used pre-minced garlic.
4) I used dried herbs instead of fresh.
5) I rounded the British measurements as follows:
Beef stock = 3/4 cup {actual equivalent is .63 cups}
Bacon = 1 cup chopped bacon {actual equivalent is 3/4 cups}
Red Wine = 2 cups {actual equivalent is 1.90 cups}
6) I cooked mine in the crockpot, on low, for close to 4 hours and then left it on warm for another 2 hours.

The results:  I didn’t taste much difference between the two.  My husband tasted no difference.  I tried to pick out which of the beef pieces had been seared and which hadn’t but really couldn’t.  Would I recommend not searing at all?  No.  But, I don’t think skipping the searing on the second batch of beef negatively impacted the dish and it saved me a bunch of time.
I think I would at least give the shallots a quick turn in the pan though. Maybe in combination with the mushrooms because they weren’t quite as soft as I would have preferred in my version.

Now, it is your turn!  Give Anyonita’s recipe a try.  Whether you make it exactly as written or with a few tweaks, you definitely will not regret it! 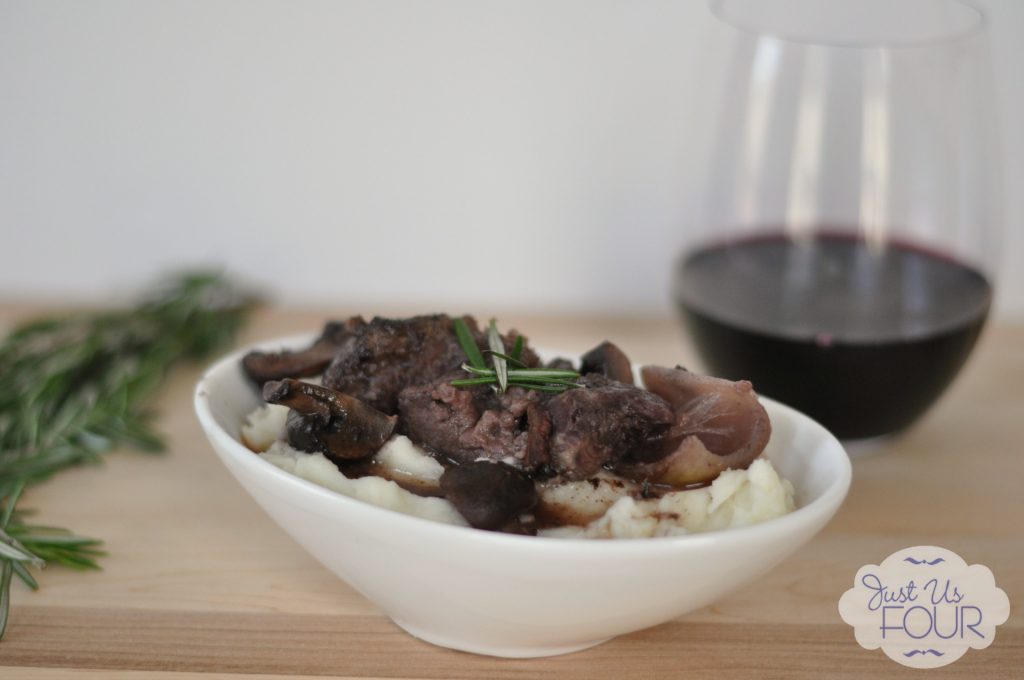 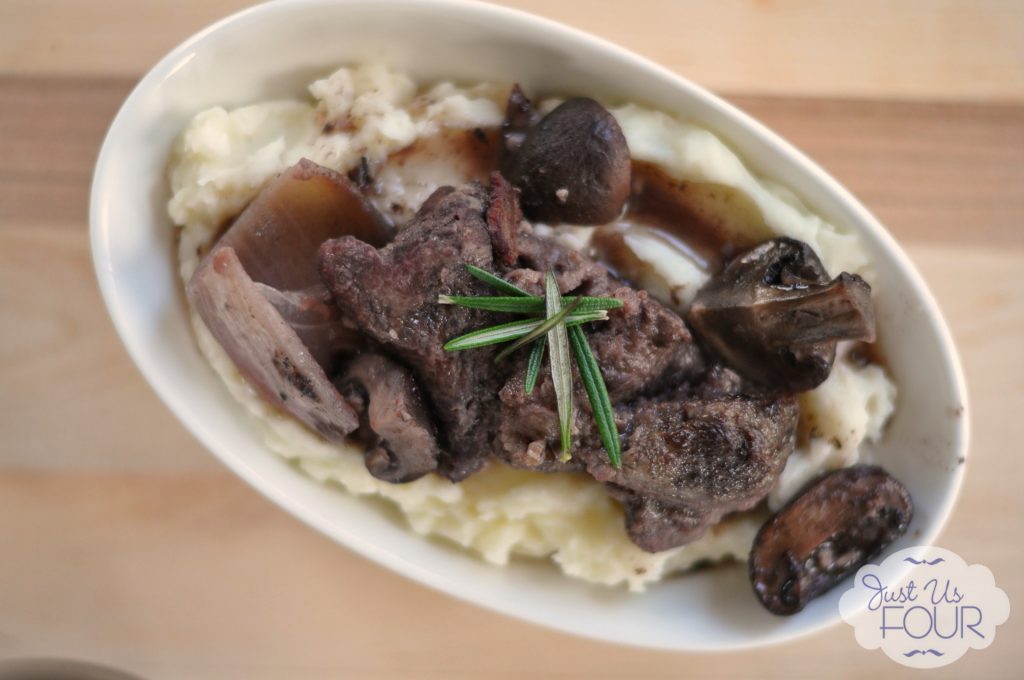 Want to have your recipe appear in the Shannah’s Test Kitchen Series?  You can sign up here!