You are here: Home / Crafts / A million little projects
I am sure it seems like I haven’t been doing much around our house…or much at all given the posts you’ve been seeing recently.
In reality, my time has been spent preparing for the birthday parties that are being held during back to back weekends.  Having more than one kid?  Here’s a tip…do your best to have them in different months!  You can thank me later.
First up was Baby E’s party.  After seeing some photos over at Blow Out Party, my theme was set.  Because I was short on time (preparing two parties + working + other commitments), I contacted Mae Armstrong to purchase the templates she used.  A quick google checkout later and I was ready to print!
Then came the painstakingly tedious part…cutting out all of the little elephants and other signs! (Note to self: for future parties or labels, use circles, squares or rectangles…paper cutters and punches are your friends!) 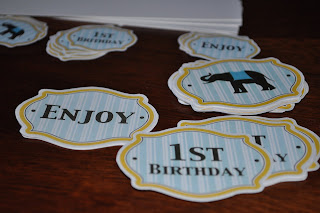 The larger ones were attached to the favors with the little adhesive dots. 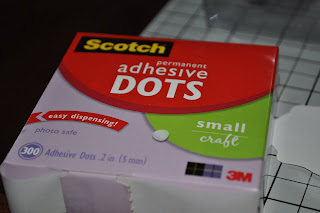 Or, two extra slices with the exacto to attach them to the straws.

I printed the smaller ones onto adhesive paper. Then, once I had them all cut out, I attached them to the plain, white flatware wraps. 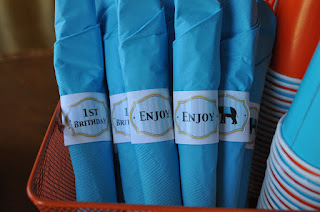 I had grand plans to make an iron-on #1 for his t-shirt using the elephant fabric I purchased.  I just plain ran out of time.  So, instead, I used some fabric glue and made a quick runner (of sorts) for the party table. 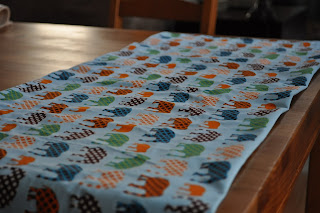 I did find time to make a cake pop stand for his party though since we were doing cake pops from DC Cake Pops instead of traditional cake/cupcakes for our family and friends. A little bit of tissue paper + Styrofoam + lots of double sided tape = cake pop stand! When I wasn’t working on E’s party, I was spending time on H’s upcoming party.  She requested a Princess Sparkle Pool Party and, especially since she had to wait patiently through her brother’s birthday festivities, I wanted to make it extra special for her.

First up was the marshmallow “garden” which is really just tissue paper and ribbon covered Styrofoam (much like E’s cake pop stand). 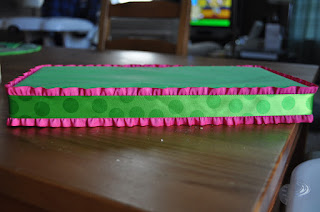 I purchased labels from The Celebration Shoppe (where we also bought her invitations) and printed them out. 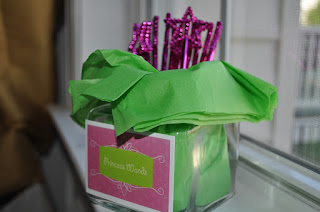 Since it is a pool party, we have sunglasses for the kids plus rings for the princess/sparkle part of the shin-dig. 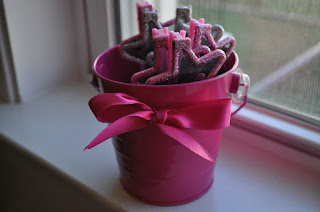 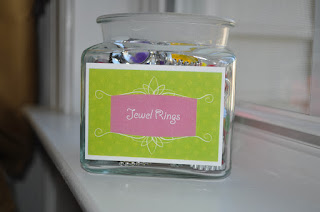 I will be wrapping the flatware in these cute little paper wraps. 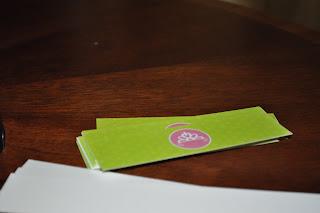 Birthday parties aren’t all that is going on in the house right now.  I’ve managed to slip in a few very minor non-birthday related projects.
I usually keep a pad of paper on the side of our refrigerator to make it easy to make notes, write a list, etc.  It is in close proximity to the pen cup on our peninsula so it works great.  The problem: a certain 4 year old LOVES to pull off the sheets of paper because they are sticky on the back (post-it note pad).  She doesn’t seem as enamored with regular paper so I picked up three pads of paper on the clearance aisle at Target and some magnetic strips. I cut the magnetic strips and stuck them to the back of the pads…instant magnetic NON-sticky pads. 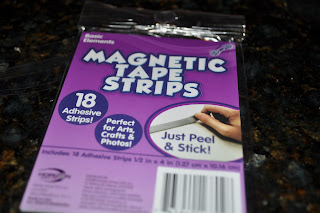 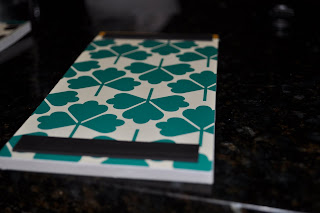 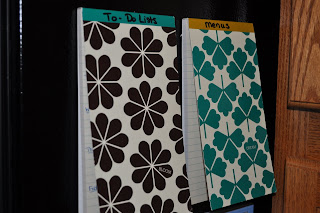 I also rearranged our magnetic dry erase board on the front of the fridge.  It was a jumbled mess so I sectioned off the top into our three most often needed place to buy things: Costco, Target and the grocery store.  Then, in the bottom section, I added these cute ‘days of the week’ magnets so I can write the menu next to it for each day. 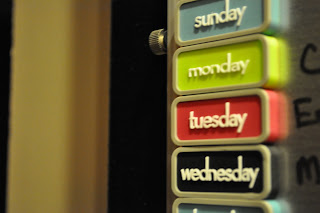 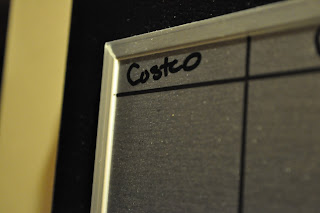 I also (finally!) unpacked the pillows I had purchased forever ago from One Kings Lane. We have a drooling problem when a certain person naps in our house so these get put away in a special place when I suspect it’s going to be naptime. 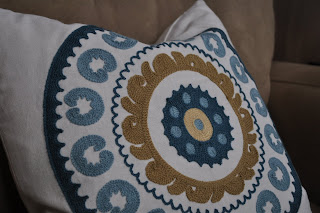 And over in the “it’s about time” category, we finally hung the pictures in our foyer! 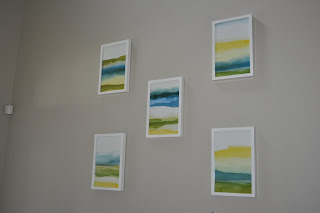 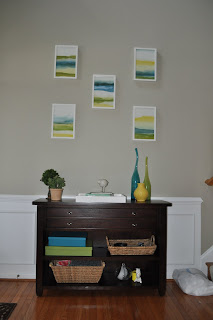 « What to Cook Wednesday time!
Genius! »