The aforementioned monsoon steady rain I mentioned yesterday has put a damper on my current to-do list project: sanding and repainting the railings and basement egress bricks. A rational person would just move to something else on the to-do list that doesn’t require being outdoors. I’ll never claim to be rational though and my brain just can’t move though the list like that because then I wouldn’t make it back to the “scheduled” project. Type A much…maybe just a little. So, I did what any irrational person would do and started a project not found anywhere on my list!
Much of the furniture in our house is old. Not old in a fabulous antique sort of way but old in a “I’m too cheap/lazy to put in the effort to buy new furniture.” Actually, that isn’t true. We do have a good reason for the oldness of our furniture. Up until the last year, we’ve always lived in an interim home…somewhere we didn’t plan to be for more than a few years. This interim home thinking kept us from buying new furniture because we didn’t want to drop a bunch of money on something that may not fit into our more permanent space. Now that we are in that more permanent space, I think we are ready to start replacing some of our older furniture. First on the list is the master bedroom furniture.
Our master bedroom furniture was a gift from my parents after college. We bought it used and it has been well used be me (when I was single) and then by Mathlete hubby too after we got married. This set consists of a bed and a long dresser with mirror. (Pardon the mess you see here in the pictures! We were working on emptying the dresser and pulling the stuff from under the bed when I snapped these pictures.)

Our bedroom isn’t really set up in a way where this size furniture works too well. The length of the dresser makes it only work in one space (unless we move it to the sitting area) forcing us to put the bed between the two windows on one of the walls. (I am sort of scooping myself with the pictures above because you can obviously tell the difference in the wall color and drapes!) 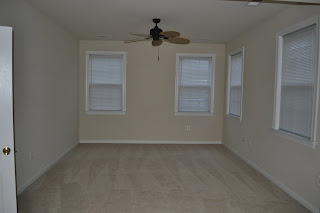 I don’t really mind the bed on that wall between the two windows and, quite honestly, might leave it there even when we get new furniture. However, because of the windows, I feel like a lower bed would look a lot better so it doesn’t crowd the windows so much. Something along the lines of: 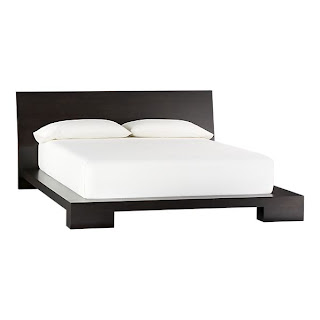 I’ve been working up to getting rid of this bedroom furniture for awhile but never really made a move because I didn’t have anything to replace it with. Then, I decided that, if I sold the current stuff, I’d buy new stuff sooner. Yeah, I know, there goes that irrational thinking again! So, in the midst of our rain showers, I had Mathlete hubby move our bedroom furniture into the garage and promptly posted it on Craigslist. It is a great set just begging to be refinished and updated by someone with more time and patience than I have right now. So, with a little luck, this furniture will be gone by the end of the weekend and I can start working on purchasing the replacements.