You are here: Home / Crafts / Pinning a Challenge

My final product ended up being a bunch of different Pinterest items all put together but I am really happy with them!

I’ve been jonesing for some new glass hurricane vases but I really didn’t want to pay the new glass hurricane price tag!  Thanks to Pinterest, I had seen people make news one out of dollar store materials.  In my dollar store though, the supplies would have made vases a lot smaller than I was looking for.
While hunting for Krylon paint for the One Month to Win It – Round 1 challenge, I stumbled across some larger supplies at Wal-Mart. 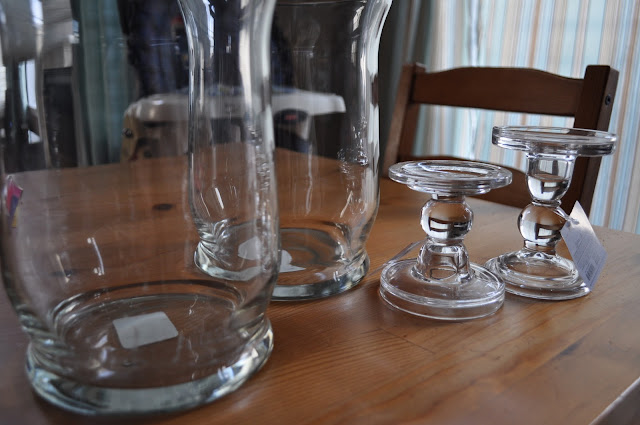 Wal-Mart had reasonably priced hurricane vases for $15 each but, if I could make it with the separate pieces I found, they would be less than $7 each.  2 for the price of 1…cha ching!
I dug through my adhesive collection and found some china and glass cement. 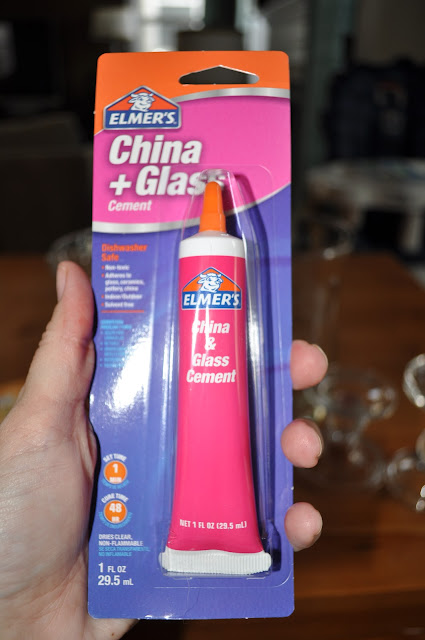 I chose this because it was dishwasher safe.  I find it easiest to get glitter and stuff out of vases by just shoving them in the dishwasher so that was a big bonus.
First, I had to clean all of the glassware.  Some of it still had price tag stickers so I used goo gone to remove those first.  Then, I wiped everything down with alcohol. 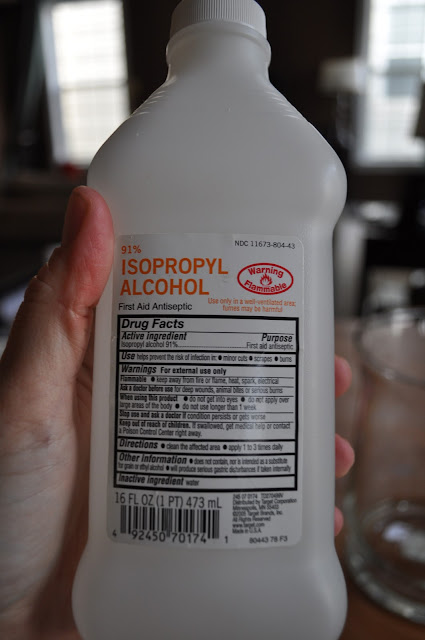 I put a thin layer of the cement around the edge of the candle holder.  It comes out white but dries clear so don’t be worried if you use it and it shows up white at first. 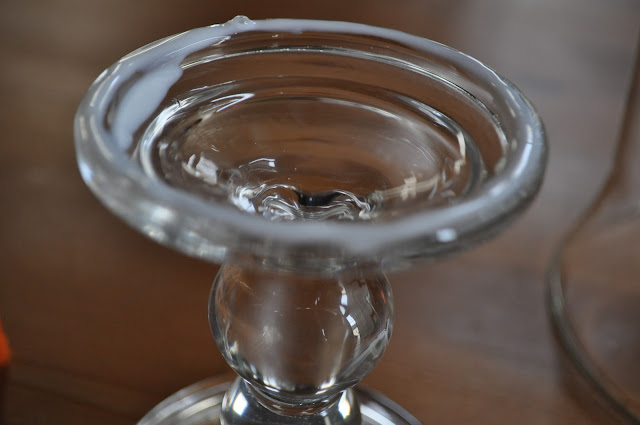 I placed the candle holder on top (the other piece was upside down) and pressed.  I held it for about 45 seconds.  Then, since the full drying time is 3-6 hours, I used a book to put pressure on it while it dried.  {Thanks again to Mathlete for the awesome Anniversary gift…it is already proving to be extremely useful in and OUT of the kitchen!} 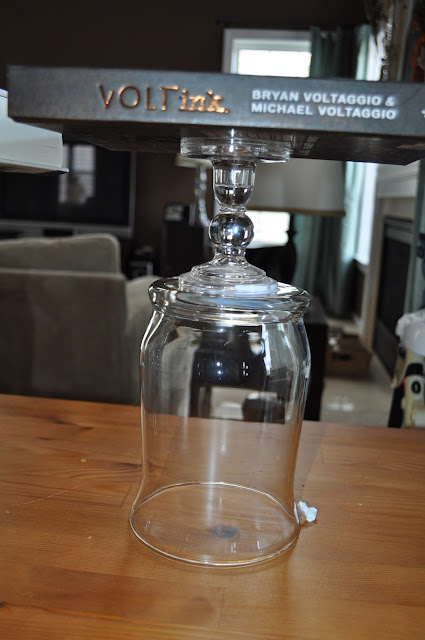 While my hurricane vases dried, I broke out some dollar store pine cones and my spray paint can. 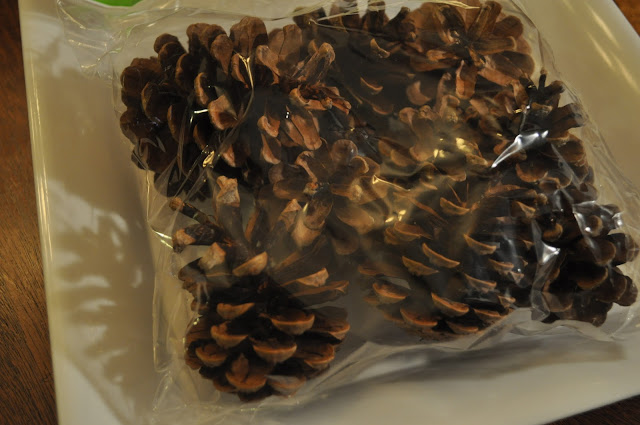 I sprayed on some red and gold spray paint and left them to dry while I searched for some other vase filler. 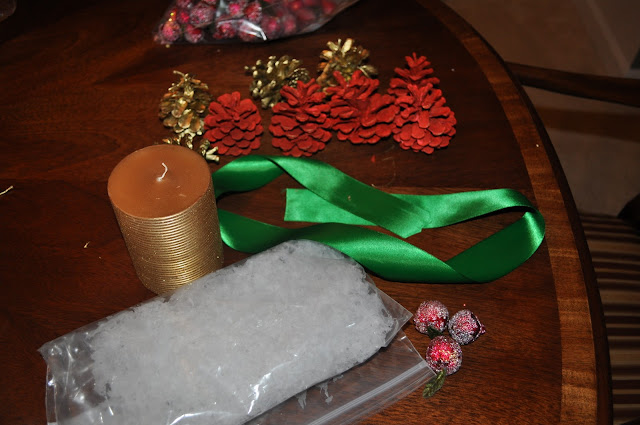 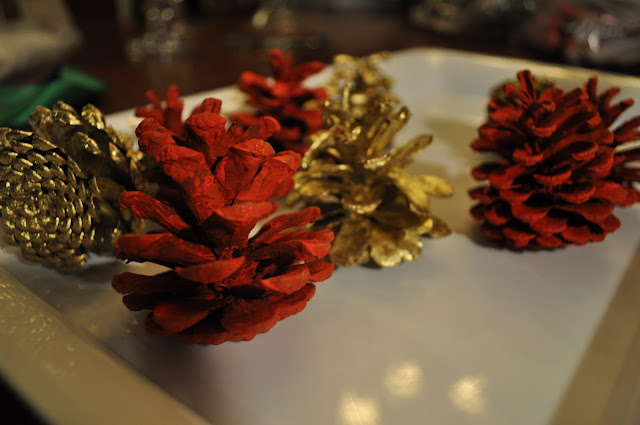 I just randomly put things into the different vases until I was happy with how they looked.  I had an extra vase that I threw into the mix for fun too. 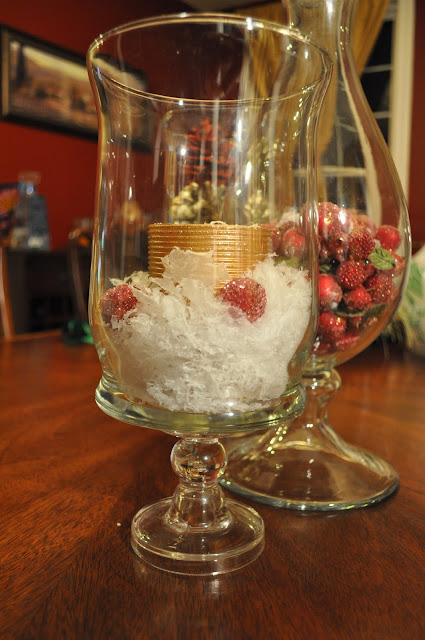 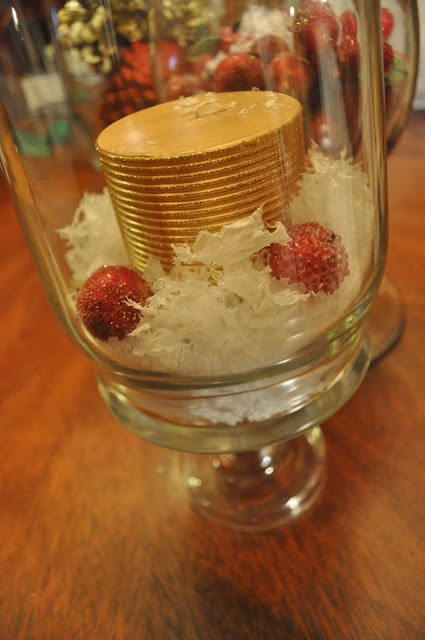 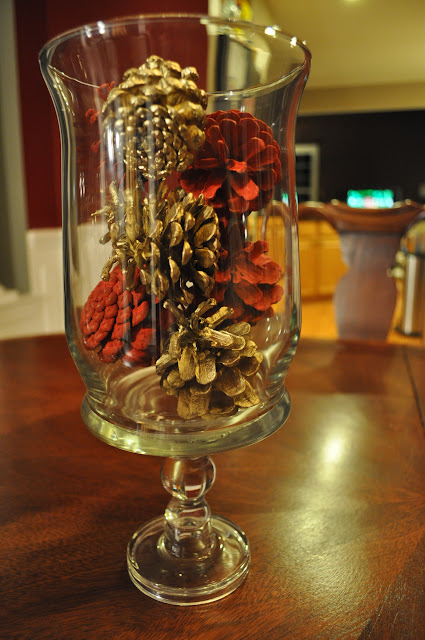 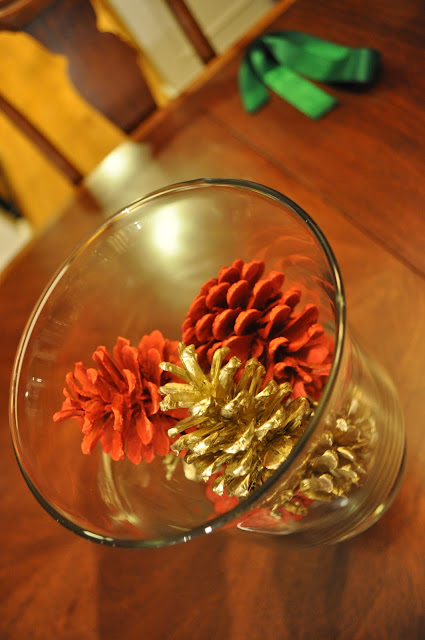 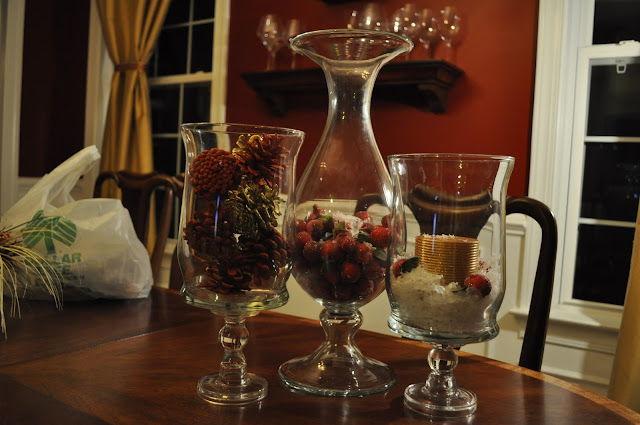 Now, these babies are ready for Christmas which is fast approaching!

**Sorry for the terrible photos here.  I am a night time crafter this week due to an super crowded weekend!**

This post is partying at the following locations:
Making Monday Marvelous at C.R.A.F.T., I Made the World Cuter Today at Making the World Cuter, Motivate Me Monday at Keeping it Simple, Metamorphosis Monday at Between Naps on the Porch, Get Your Craft on Tuesday at Today’s Creative Blog, Tutorial Tuesday at With Hope Studios, Nifty Thrifty Tuesdays at Coastal Charm, Anything Related at All Thingz Related, Take a Look Tuesday at Sugar Bee Crafts, Tip Me Tuesday at Tip Junkie, Hoo’s Got Talent at Nightowl Crafting, Show & Share at Southern Lovely, Wow Me Wednesday on Ginger Snap Crafts, Whatever Goes Wednesday at Someday Crafts, Show and Tell at Blue Cricket Designs, Penny Pinching Party at The Thrifty Home, Fall in Love with Your Home at Décor to Adore, We’re Organized Wednesday at Organize and Decorate Everything, 100 Ideas Under $100 at Beyond the Picket Fence, Coffee and Conversation Thursday at With a Shot of Brandy, Strut Your Stuff at Somewhat Simple, Hooking up with HoH at House of Hepworths, Doggone Dirty Craftin at Rhinestone Beagle, Look at Me, I’m so Crafty at It’s Fun to Craft, Craft, Scrappy Happy Me Thursday at Craft, Scappy Happy, Feature Yourself Friday at Fingerprints on the Fridge, Frugalicious Friday at Finding Fabulous, Flaunt it Friday at Chic on a Shoestring Decorating, The Pity Party at 30 Days, the Weekend Wrap-up Party at Tatertots and Jello, Show and Tell Saturday at Be Different, Act Normal, and the Before and After Party at Thrifty Décor Chick.

You can also find this post linked up the Pinterest Challenge at Bower Power, Young House Love and House of Earnest

« Weekend Roundup with a Bonus!
WTCW »