You are here: Home / Crafts / Let’s Get Cube-icle!

Awhile back, I purchased some white cubes from West Elm knowing they would eventually live in my guest room between the two windows.  Each time I went to hang them on the wall though, something stopped me because they just looked a little too plain for the space. 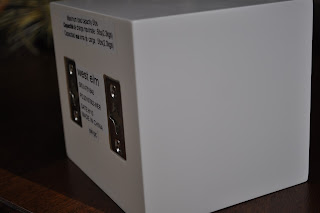 What’s a girl to do with plain cubes?  That question plagued me for months weeks.  At first, I thought spray paint would be the answer (you know I love my spray paint!) but never fell in love with the idea.  H was hanging out with me one day while I folded laundry (guest bed = laundry central) and thought the cubes were toys for (now) Toddler E.  She was adament that he wouldn’t want to play with them though because they didn’t have anything on them to look at.  She was right…they were boring because there wasn’t anything on them.  I didn’t have stuff to put on top of them which is why I had been so hesitant to put them up.  That girl is brilliant (at 4!) I tell you.
Mathlete’s solution was to just find a few knick knacks and set them top.  I wasn’t interested in that though.  I love me some knick knacks but not for this particular thing.  I whisked my little craft genius to Michaels and we picked up some paint and stencils. 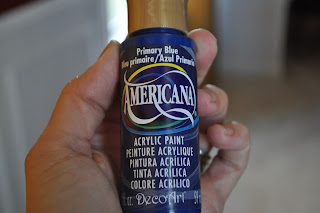 I waited until naptime so I wouldn’t have any little helpers around (H loves to paint!).  My hand isn’t so steady to begin with…blame it on the caffeine…so any distraction would probably prove disastorous for this little project.  Baby asleep: check.  H having quiet time: check.  Time to stencil.
In went the paint into a bowl and I got out my little foam stamper 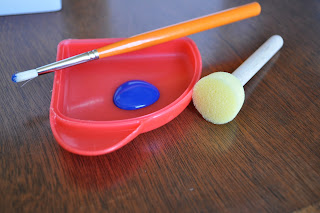 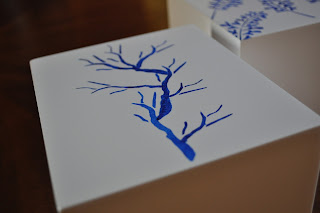 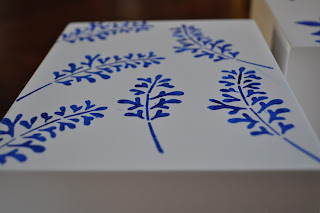 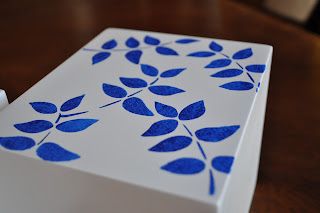 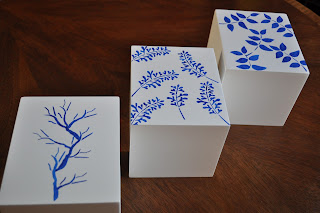 The bedding in the guest room has some leaves and branches on it so I really wanted to try and tie into that. 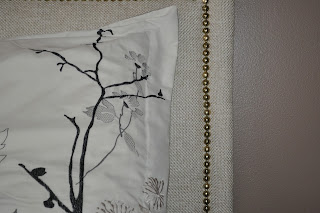 Now, I will just add these to the every growing pile of things that need to be hung on the wall in that room!  One day…

« Fabulous Freebie Friday – #4
And the award goes to »